In the highly competitive race to get self-driving cars to the market, most companies hold their secrets close. But when it comes to helping those cars figure out where they are on the road, some experts are ready to open up.

Argo AI, based in the Strip District, and Aptiv, based in O’Hara, publicly released some of their own data sets earlier this year in an effort to further advancement in the field. The companies shared parts of their own maps of cities where they are testing self-driving cars, including Pittsburgh.

That may seem strange considering the abundance of applications like Google Maps, Apple Maps and Waze that have already made road maps public and easily accessible — and are downloaded on just about every mobile phone.

But a self-driving car can’t plug into commercially available GPS programs and be on its way, the way a human would. Instead, it needs a highly precise map to help it learn as much as possible before even starting its engine. A few feet off either way can be the difference between driving into a river or driving alongside it.

“A map is a good representation of the world the autonomous vehicle will encounter,” said Praveen Chandrasekar, senior product manager of autonomous driving at TomTom, an Amsterdam-based company that makes high-definition maps for autonomous vehicles and other machine learning projects.

Every player in the game enlists its own fleet of vehicles to drive around — and around and around again — an area of the city, capturing images and data to create a 3D representation of the world. The newly forming industry hasn’t yet worked out a single system that everyone can tap into, so they all invest resources to make their own.

Part of that is because each company’s map is specialized to its own vehicles.

But the move by Aptiv in March and Argo AI in June could open the way to a future where mapping resources are shared across the industry if only to further research in the autonomous vehicle field.

Even before accounting for the expense of building a map, it costs at least a few hundred thousand dollars to produce a prototype self-driving test vehicle, Argo AI stated in a blog post announcing its new initiative.

The equipment to make the maps comes with a steep price tag as well.

A lidar sensor, which sits on the roof of a car and collects some of the most detailed information about a road, costs anywhere between $70,000 and $1 million, said Christoph Mertz, a researcher at Carnegie Mellon University’s Robotics Institute. 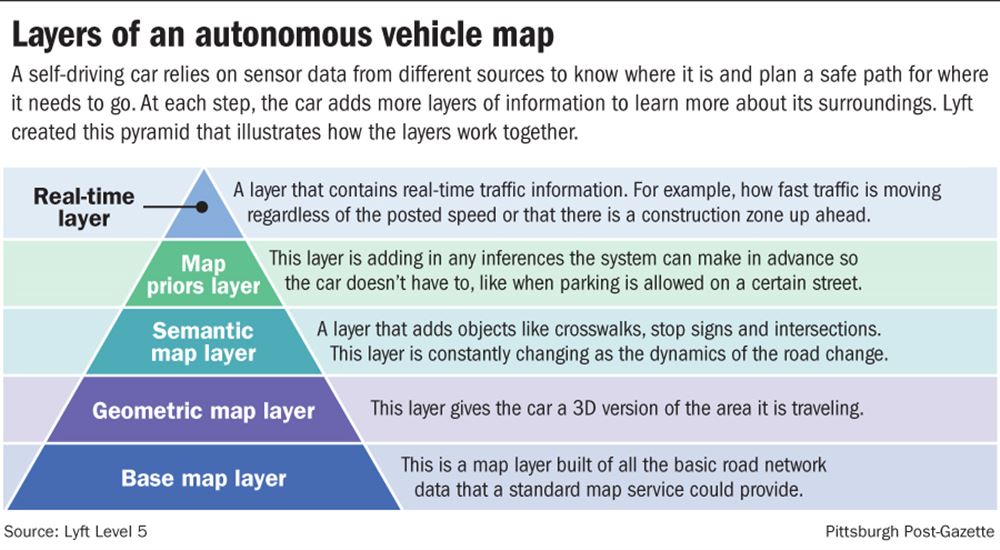 The four companies testing in Pittsburgh — Argo AI, Aptiv, Uber and Aurora — all create their own maps using their own fleets. Together, there are about 80 self-driving cars on Pittsburgh’s roads.

“In principle it’s not hard, but it’s a little bit tedious because you have to drive every road,” Mr. Mertz said. “But the thing is, things change all the time. … It’s not feasible to keep things updated all the time because it’s just too expensive.”

Mr. Mertz, who also runs a tech company that uses sensor data to help city governments improve the road infrastructure, pictures a future where the government is more involved to cut out some of the redundancy in the industry.

One idea, he said, is to put smartphones in vehicles that routinely cover large swaths of the city, like garbage trucks.

Those phones could detect changes to the road — such as construction and potholes — alerting the companies to send out the expensive equipment like lidar sensors to make updates to its maps.

That’s only a temporary solution, he said, until every car is self-driving and equipped with high-end equipment of its own.

How long it takes to gather enough map information depends on the type of road and the type of feature the company wants to capture, said Sheila Nedelcu, director of product management for automated driving for Here Technologies, a map manufacturer based in Amsterdam with headquarters in Chicago. It’s hard in a city, she said, because the car’s sensors and cameras are trying to capture everything around them.

“I think it’s a challenge because essentially it has to be a super precise map,” said Ms. Nedelcu, who previously worked for Aptiv. “If there’s no human in the car, the car has to be able to react as swiftly as a human could.”

High-definition maps work with the car’s other systems to plan a path by looking kilometres ahead so the vehicle knows what it should anticipate — like a heavily trafficked parking lane, traffic light or a posted change in speed limit.

Some tech developers don’t think high-definition maps are a sustainable route for the industry. Instead, they are working to build self-driving cars that don’t need a built-in map at all.

One research lab at the Massachusetts Institute of Technology is developing an autonomous vehicle that follows a standard map and uses sensors to make a step-by-step route as it goes. It works in the same way a human would use a GPS on an unfamiliar road, said Teddy Ort, lead author of the study. The car picks a spot in its line of vision as its short-term goal, heads there and then restarts the process.

“The vehicle will plan a path based on what it sees,” Mr. Ort said. “It’s making that plan on the spot.”

Because the route’s not pre-planned, the car can make a wrong turn just like a human would.

High-definition maps are the faster route to market, Mr. Ort said, but the MapLite technology has bigger applications for the future.

“If you have a vehicle that can get from one place to another safely, you can have robots in warehouses, supermarkets, in your home,” he said. “People are going to want to use these things in areas where it’s just not that feasible to build and maintain maps.”

In the meantime, the industry is still reliant on humans to catch the robots’ errors — both in the self-driving vehicles and in the data they collect.

At Uber, there is a team of people who review the maps that its software creates through algorithms and machine learning. Oftentimes, people will catch a small error that doesn’t match up with the images they have, so they will nudge a building a little bit this direction or a lane marking a little bit that direction.

“We’re striving for a day when just like our cars can drive themselves, our maps can build themselves as well,” he said. “None of us is there yet, but we’re getting close.

All credits to original source business@post-gazette.com – link below:

The only object Falco’s artificial intelligence has had trouble identifying in test runs was an elk swimming in the sea, according to the ferry’s captain. Falco, a ferry which has been transformed into a self-driving […]

Fisker is jumping into the electric-crossover fray, announcing Monday plans for a new model that will have a 300-mile driving range and a starting price below $40,000. Sales to customers are expected to begin in […]

Truly self-driving, full-time autonomous vehicles are still probably years away, in any quantity bigger than test fleets strictly limited to clearly defined areas. But insurance companies and safety regulators are already starting to think through […]