Largely dependent on nationality and age, the perception of self-driving cars differ across the world.

As autonomous cars are becoming more of a reality, a recent study by the German carmaker, Audi, shows how interested people are about owning one.

Surveying over 21,000 people, the report published on Wednesday, generally highlighted a high interest in self-driving cars across the board, but there is still some reluctance.

s we move closer to a reality where roads are filled with self-driving vehicles, understanding how humans would welcome this mode of transport is crucial for the industry.

What did the report discover? 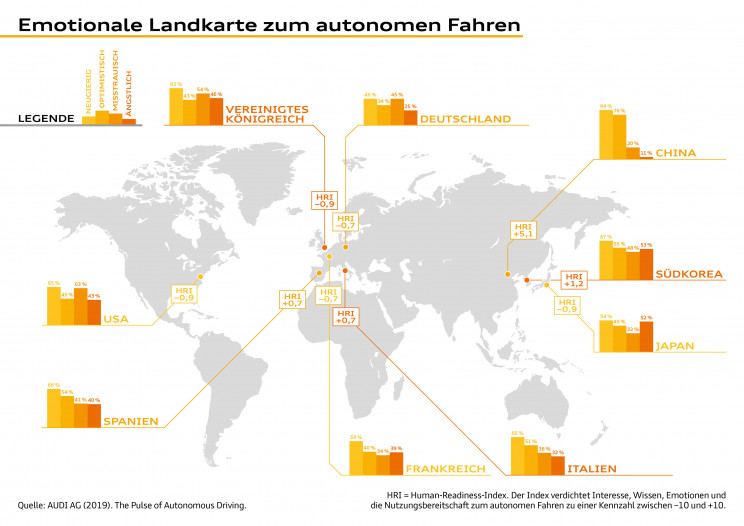 The study then divided the responses into three categories: the emotional landscape, the human readiness index (HRI), and several user typology templates.

HRI is the most crucial. It covers everything from age groups, to gender, living environment, income, education, and the number of kilometres a respondent drives every day. Across the different countries, younger generations generally showed a higher interest in autonomous driving.

Generation Z — those under 24 years old — showed a 73% interest in self-driving technology and said they have a “high readiness” for it. Next up were the Millenials, followed by the Baby Boomers, who were not as enthusiastic.

All in all, almost half of those interviewed showed a generally positive view of autonomous vehicles. There is still a bit of convincing left to do, as the percentage of optimists came to 49%.

Globally, around 82% showed signs of interest. However, this depended largely on where the people came from.

In China and South Korea, for instance, 98% and 94% of respondents were keen. Whereas in Japan and the U.S., only 74% and 72% respectively said they would be on board.

Aside from Japan, Asia came up as the continent showing the most interest in autonomous cars, with Western nations less inclined, or merely indifferent.

Audi’s study broke down the concerns of those showing scepticism. 70% of people are concerned about giving up control. Whereas, 65% of people are worried about how a car assesses situations independently from a human. Furthermore, lack of legal framework, data security, and lack of the simple joy of driving were the other reasons as to why people were less than enthusiastic.

Interestingly, according to Audi’s report, even after people viewed autonomous cars crashing, 61% said they wouldn’t change their mind about using one.

With all this useful information, Audi has a better idea for a game plan moving forward. Seemingly, autonomous cars and technology are not going to be a good fit for everyone. Depending on whether people hail from the countryside or urban cities, or what their income is, there will always be differing attitudes toward self-driving technology.

The plan moving forward will be to focus on educating the public, as well as ensuring safety on the roads.

All credits to source below by:

StreetDrone, a self-driving systems provider to autonomous businesses has today announced its latest addition to its open interface, autonomous-ready vehicle range. Building on its successful deployments of the Renault Twizy (for organisations such as […]

AstaZero facility will “road-test” next-generation 5G and digital innovations to support the development of self-driving cars and other vehicles The Swedish government, in partnership with the private sector, is backing a test facility for autonomous […]

On The ‘Edge’ With Driverless Cars

How soon will it be before you pull up at a stop light in your car, and the car next to you has no one behind the wheel? Maybe sooner than you think. One of […]